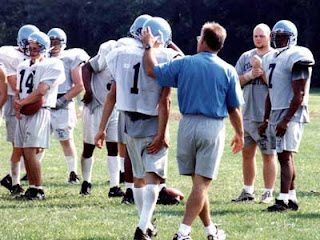 Doug Peck '02 was the Lions leading receiver at a time when you could argue it was not a very good time to be a wide out at Columbia.

You see, his career came at the same time as Johnathan Reese's time in Morningside Heights and wide receivers don't usually get much of a chance to shine when they play along with a school's all-time leading rusher.

But Peck made the most of his abbreviated time on the field. I say "abbreviated" because he only played two full years with the varsity and graduated early after the 2001 campaign.

Peck led the Lions in receiving in 2000 with 39 cathces for 560 yards and three TDs. But the 2001 season was his best. Peck made honorable mention All Ivy with 57 grabs for 822 yards and six scores.

The best game of his career came in the 2001 contest versus Yale at Wien Stadium. With the Elis mounting a fantastic effort against Reese, (they held him to just 51 yards on 21 carries), Peck filled the void with nine catches for 186 yards and two TDs.

The second score was a stunning 76-yard stop and go route that iced the 28-14 win for Colombia.

I won't soon forget the wild dance Peck did with his teammates on the Columbia sidelines after that score.

✅ OSU vs. PSU: Who you got? 🙌 Will Rutgers stay undefeated? The @BR_CFB experts answer these and more questions for Saturday