Eldarhan Machukaev, nicknamed "Sniper 95," attempted to build speed as he scrambled across a series of obstacles, with his flight-or-fight instinct on overload. The young Russian mixed martial arts fighter, sporting three wins to a single loss so far in his professional career, hasn't likely taken too many backward steps in his life.

But this was no ordinary fight. This was the Hip Show, a wacky combination of extreme game-show hijinks in the American Gladiators mold and reality combat a la The Ultimate Fighter.

With his partner eliminated, Machukaev had to survive for one minute against the tag team known as Sparta. Rinat Fakhretdinov (aka Gladiator) and Shamsudin Kurbanov (aka Agul) are two skilled fighters who had one goal at that moment—to finish Sniper 95.

Within 10 seconds, they had him on the ground. Then it happened. As Gladiator secured an ankle lock, Agul locked up an armbar. Sniper 95, helpless and alone, had to survive two submission attempts at once.

If he lasted the minute, his team would advance on points. If he tapped, it would be eliminated. As the seconds ticked off, the roar of the crowd, packed into a space in downtown Moscow that is part nightclub and part parkour playground, grew louder and louder.

Whatever else Hip Show: Arena Combat is, it's certainly not boring.

"This is realistic fighting," play-by-play announcer Cyrus Fees told Bleacher Report. "If you were going to get in a bar fight or a street fight, realistically it's often going to be two-on-two or two-on-one situations. We feel it's a great way for these fighters to test out their martial arts and to create a really entertaining show for the viewers."

But when watching a lone man fend off two highly trained martial artists, while all three of them dart around a series of padded obstacles up to 6.5 inches off the ground, questions emerge that each individual viewer will have to answer for him or herself.

Is this morally OK? Is this competition safe? Is this the kind of spectacle that John McCain and other MMA critics were worried about when they attempted to eliminate the nascent sport from the face of the earth?

Should I be watching this at all?

AXS TV boss Mark Cuban thinks so. Hip Show: Arena Combat debuts on his network Friday at 10 p.m. ET. The prolific investor, and owner of the NBA's Dallas Mavericks, sees the show as a potential hit despite telling his staff it was one of the craziest pitches he had ever seen.

Or maybe because it was one of the craziest pitches he had ever seen.

"It does look a bit wild," color commentator and MMA veteran Casey Oxendine admitted. "You see these guys flying off these obstacles. You see the two-on-one situations. But once you delve into the rules you realize what a great sport it is."

Cuban and his team recognize there will be pushback from some squeamish fans. But, like MMA itself, Hip Show is never going to target for audiences.

"At first I wasn’t sure how traditional MMA audiences would react," AXS Fights CEO Andrew Simon said. "Hip Show has MMA components, athleticism and frenetic craziness. I showed clips to fight fans, fighters and other TV executives and the reaction was the same. They all thought it was awesome and they wanted to see more. I realize there will be a vocal few that will have issues with the show—but at the end of the day there is also a vocal minority that doesn’t appreciate MMA."

Hip Show takes a bit of getting used to. The pilot episode is a "best of" featuring lightweight and middleweight tournaments from 2012. Teams start with two competitors each, competing in three two-minute rounds. Points are scored by executing wrestling throws, striking sequences and clean ground-and-pound, or by holding one of the obstacles in an extended game of "king of the mountain" for 10 seconds.

Submissions and knockdowns are worth three points, and eliminating an opponent is worth five.

I was pleasantly surprised by the quality of athlete and the skills on display in the arena. This was far from tough-man level competition. These were young, professional-class fighters engaging in intense battles.

"This is taking it to the next level," Oxendine said. "We're taking all of the athletic ability and skill from the realm of mixed martial arts and transporting it to a different environment. MMA started an evolution of the martial arts. Now it's time to continue that evolution."

The vibe is also different than what you would expect from a traditional cage fight. There are two referees on site who clearly put a premium on fighter safety, breaking the action quickly if things seem to be getting out of hand. And though the athletes are in it to win it, you never get the sense that they are trying to hurt their opponents.

Yes, punches and kicks are thrown full-power. But there are signs of sportsmanship everywhere. While it is ludicrous at first glance, especially to longtime MMA fans who are wary of the sport attracting government regulatory attention, an extended viewing helps explain why Oxendine and Fees are hopeful that Hip Show: Arena Combat is a long-term play and more than a mere spectacle.

"Right now we're in the process of refining the rule set for an American and international competition. That's going to involve the unified rules," Oxendine said. "I'm going on record right now. It's actually safer than standard mixed martial arts competition. Because of the head gear. Because of the safety precautions. And because it's a sport. The prime goal is not to do damage like in MMA. It's to score points."

"You have to take risks sometimes," Simon said. "There is nothing like this on television. It is MMA meets Wipeout meets American Gladiators. I was willing to give it a shot."

Another season has already aired in Russia with a third on the way. And, according to those who have seen it, the action only ramps up.

"We're going to show you a preview of the next season and it's absolutely amazing," Fees said. "Just when you think you've seen it all, we're going to continue to evolve this product and keep it interesting."

Zabit Magomedsharipov announces he will not fight on Aug. 29, returning to Russia for now 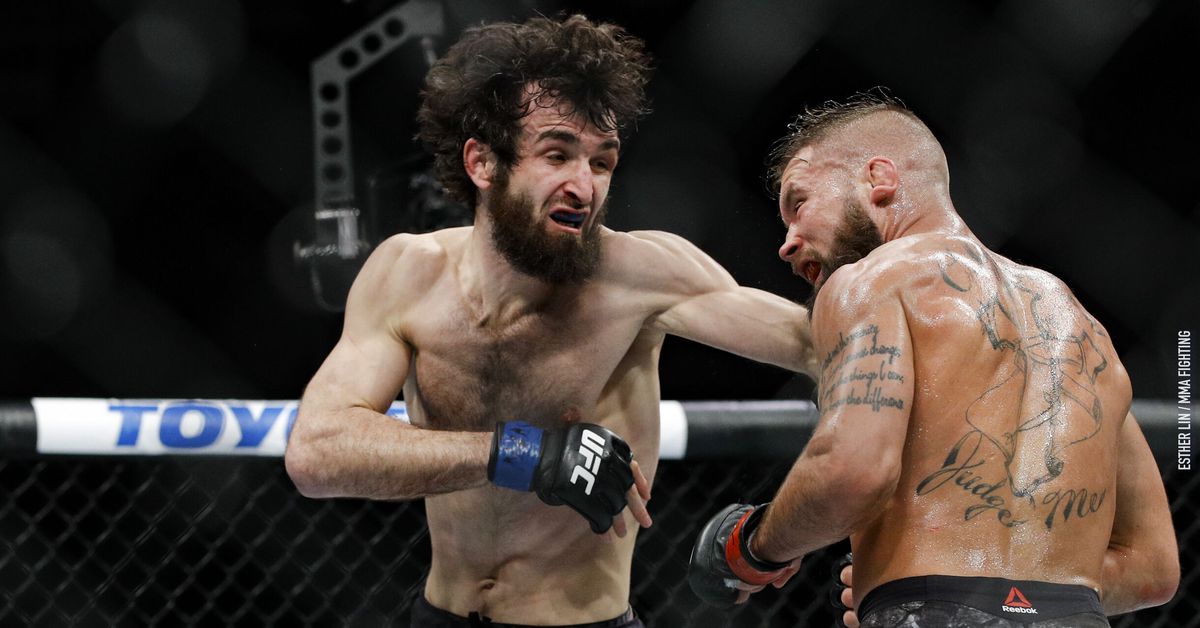 Zabit Magomedsharipov announces he will not fight on Aug. 29, returning to Russia for now