While the bulk of the offseason wheeling and dealing takes place prior to the start of spring training, there are always at least a few trades that go down after preseason play starts, and it looks like Chicago Cubs outfielder Nate Schierholtz could be on the move.

His named popped up in trade rumors at the deadline last year and at various times throughout the offseason, but he wound up staying put heading into camp. Now, according to Jon Morosi of Fox Sports, he could be available.

As Morosi points out, the health of Ryan Kalish, who missed all of 2013 following a torn labrum and subsequent cervical fusion, may play a role in the Cubs' willingness to move Schierholtz.

Kalish is a former top prospect in the Red Sox organization, so the front office has obvious connections to him, and with a number of outfielders already vying for roster spots, a move of Schierholtz could open up a spot for him.

The question now is, who could be a possible fit for Schierholtz if these rumors are in fact true and the outfielder is set to be dealt? Two teams in particular look like reasonable destinations at this point.

The Tigers are the obvious fit for Schierholtz after Andy Dirks underwent back surgery, and he is expected to be sidelined for roughly 12 weeks, according to Dayn Perry of CBS Sports.

The team signed Rajai Davis to a two-year, $10 million deal this offseason to serve as the right-handed hitting half of a platoon, but he has not had great success against right-handed pitching in his career so he's best suited remaining as a platoon option.

Ezequiel Carrera and Trevor Crowe are in camp as non-roster invitees and prospect Steven Moya has impressed so far this spring, but the most likely replacement at this point looks to be utility man Don Kelly.

The team doesn't have the deepest farm system, but if the Cubs are in fact set on dealing Schierholtz to open up a spot for Kalish, it likely won't take all that much to acquire him.

The Phillies have a clear need for a left-handed hitting corner outfielder, with Marlon Byrd, John Mayberry and Darin Ruf all hitting from the right side of the plate.

Schierholtz was acquired by the Phillies at the deadline in 2012 as part of the Hunter Pence trade, and he hit .273/.319/.379 down the stretch before being non-tendered.

The team took a chance on Bobby Abreu this spring after a solid winter league performance, and there was some hope that he could fill the void. However, he has gone just 3-for-20 so far this spring and has looked very much like a 40-year-old who sat out all of last season.

Trading any of their prospects to add another veteran may not make sense long-term, but the Phillies seem set on making a run at contention this year, and they may be willing to pull the trigger on a deal as a result.

The Arizona Diamondbacks were the team most linked to Schierholtz during the offseason as they looked for a left-handed hitting bat with some pop to protect Paul Goldschmidt.

They would end up acquiring Mark Trumbo, a right-handed hitter, and are banking on Miguel Montero putting together a bounce back season hitting between them.

Outside of that, there is no other team that has been linked to Schierholtz or looks like a clear fit, and if the Cubs don't get a trade package to their liking, they may very well opt to hold onto him and shop him again come July.

His $5 million salary makes him the fifth-highest paid player on the Cubs, according to Spotrac.com, so the team does have some motivation to move him at some point. He's also a free agent at the end of the upcoming season and is unlikely to be part of the team's long-term plans. 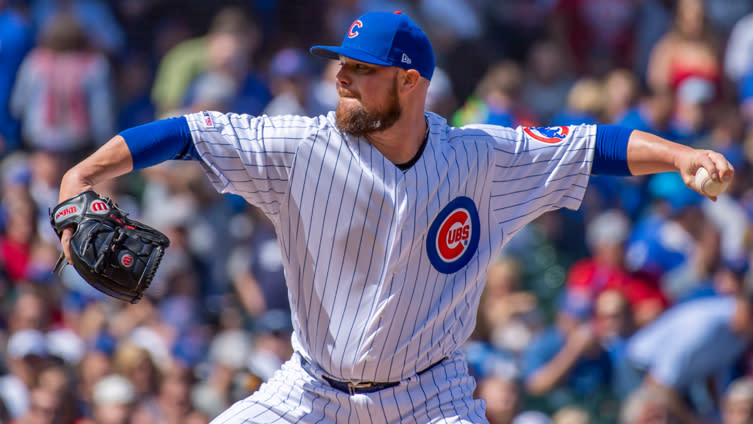