Now that they've locked up ace Clayton Kershaw to a long-term deal, the Los Angeles Dodgers can focus their attention on keeping another star player in town for the next several years.

According to Tim Brown of Yahoo! Sports, negotiations for shortstop Hanley Ramirez, who can become a free agent after the 2014 season, are in the early stages but are ongoing.

As was the case with Kershaw, who signed a seven-year, $215 million contract extension a year before he was eligible to become a free agent, the Dodgers aren't likely to get the discount they might have gotten had either player been further away from free agency.

If he does happen to reach free agency, Ramirez will be entering his age-31 season and should easily surpass the four-year, $53 million deal that Jhonny Peralta signed with the St. Louis Cardinals this offseason.

Like Ramirez, Peralta is an above-average hitting shortstop who might have to move to third base within the next few years because of his defensive limitations. But the comparisons end there.

Ramirez's agent, Adam Katz, could argue that his client deserves to be among the highest-paid shortstops in the game. OK, so he's already there if you only factor in the annual salary. His $16 million salary for 2014 puts him in a three-way tie with Jose Reyes and Troy Tulowitzki (pictured).

But in terms of the total value of the deal, it wouldn't be a huge surprise if Katz uses, or is using, the last six years of Tulowitzki's current deal as a comparison and possibly a baseline for negotiations.

Here's the argument for why it could be a mistake for the Dodgers to give him that kind of money over that length of time.

It's hard to ignore how well Ramirez played last season once he was healthy. But we also can't forget about his decline over the previous two seasons (.742 OPS, 17 HR, 20 SB per season from 2011-2012) and how far his value had fallen by the time the Dodgers acquired him from the Marlins in July 2012 for pitchers Nathan Eovaldi and Scott McGough.

After struggling for most of 2011, Ramirez's season was cut short by a shoulder injury that required surgery. He played 157 games in 2012, although his production fell short of where it had been prior to the 2011 season. He also played 90 games at third base, which he had only ever played a handful of times early in his minor league career. The shoulder surgery and the position change both could've played major factors.

If his strong comeback season in 2013 didn't take so long to get going—he was limited to only four games over the first two months of the season due to thumb and hamstring injuries—he'd have a much stronger argument for those two factors contributing to his numbers falling off.

Instead, it's hard to be completely convinced that Ramirez can still be the same player over a full season. It's also fair to question his ability to stay healthy. Paying him to be the player he was from 2006-2010 in hopes that he'd repeat the performance in his early-to-mid-30's might not be the best idea in the world.

While the Dodgers are a team built to win now and their window of contention appears to be wide open for at least the next couple of seasons, there will be a few more options on the free-agent market next season who could come much cheaper. J.J. Hardy and Jed Lowrie will be the top shortstops available aside from Ramirez, while Asdrubal Cabrera could also be a popular name if he has a strong season.

And if the Dodgers would like to keep the big league path clear for top prospect Kyle Seager, who is likely to begin the 2014 season in High-A and could be knocking down the door to the majors by late 2015, they may not want to sign any shortstop to a long-term deal.

With that said, Ramirez's value is high after his impressive half-season. It could be even higher if he can play 140-plus games and put up an .850-plus OPS with 25 homers and 20 stolen bases.

Barring a mediocre 2014, some team is very likely to pay him big money on a multi-year deal if he reaches free agency next offseason. The Dodgers will need to decide if they're better off with or without him in the mix for 2015 and beyond and whether it's worth adding another mega-contract to their payroll that will likely pay a player beyond his prime. 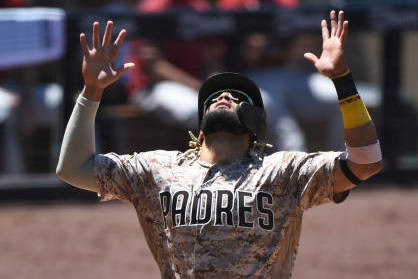