The Lakers saved their best game of the series for last in administering a season-ending beatdown to the Nuggets, 119-92, and making their return to the NBA Finals on Friday night. Los Angeles showed it was focused and ready to play from the start of the game.

Trevor Ariza set the tone early by knocking down three shots from behind the arc; he finished the game with 17 points.

Los Angeles was active, aggressive, attacking the basket, and had everything working. Kobe Bryant wore the hat of the facilitator early, getting all of his teammates involved, and then showed why he is the best closer in the game.

Nine Lakers had taken a shot in the first half prior to his taking over the game. Los Angeles used a focused, total-team effort.

Kobe had 18 points on 6-for-10 shooting, six assists, and one huge blocked shot in the first half. He scored 11 of those points during a decisive, 21-7 Lakers scoring run that gave Los Angeles a 53-40 lead at halftime.

Bryant’s stat line for the game showed that he scored 35 points, handed out 10 assists, and grabbed 10 rebounds. All of his scoring was accomplished by efficiently using 20 shots. But stats couldn't convey the leadership, teaching, and motivating he did to raise his teammates' level of play.

The Lakers used all of their weapons to increase their lead and had five players score in double-digits. 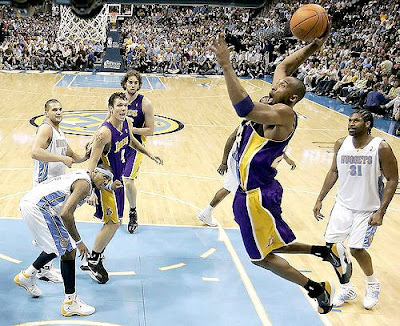 Los Angeles held the lead for the majority of the game and increased the margin to as much as 29 points. The Nuggets faithful headed for the the exits with more than four minutes left in regulation.

Carmelo Anthony scored 25 points on his 25th birthday, and J.R. Smith pumped in 24 points, but to say this wasn’t the Nuggets' day would be an understatement. Denver trailed for all but a few seconds of the game and never mounted a serious charge after halftime.

The Lakers' 4-2 series win over the Nuggets means that it is the 16th straight time that team has won a series after winning Game One.

Bryant has scored at least 500 points in four different postseasons; only Michael Jordan, who accomplished the feat eight times, has done it more.

The Lakers have advanced to the NBA Finals for the second straight season and their 30th appearance overall.

Compared to last year's cruise through the rest of the West, the Lakers' 2009 playoff journey has been a much more bruising and difficult task. Los Angeles had done battle with Utah and Houston before engaging in a tough series with Denver.

The road to the Finals this year has taken the Lakers through an arduous, grueling, and physical two weeks of basketball. Ending the series in six games has allowed them some much needed rest.