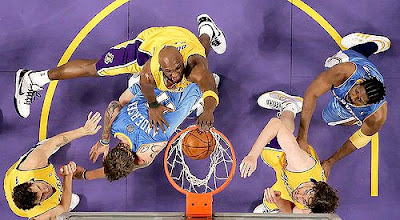 The Lakers and Nuggets played this game even. The teams were tied after three quarters when Los Angeles put on a 23-5 run to separate themselves from Denver and take a 3-2 series lead. The Lakers got an excellent start from their reserves.

Kobe Bryant led the Lakers in scoring with 22 points but he did it by shooting 13 shots. He wore the hat of the facilitator and drew countless double-teams, findind open teammates. Those teammates knocked down shots.

Everyone who touched the floor contributed to this win. However, reserve Shannon Brown might’ve had the shot of the game when he got out on the fast break and put Chris Andersen on one of his posters by dunking over him.

Lamar Odom banged on Chris "the Birdman" Andersen as well and could easily challenge him for the shot of the game. The Lakers played with a sense of urgency, with passion and did an excellent job of executing down the stretch.

The Lakers were aggressive, attacked the basket and didn’t settle for jump shots. Derek Fisher and Andrew Bynum combined to score 21 points. Pau Gasol had another solid outing recording his eighth straight double-double scoring 14 points and pulling down 10 rebounds.

Lamar Odom was active and finally put his stamp on this series. Odom stepped his game up and filled the stat sheet, scoring 19 points, pulling down 14 rebounds, handing out three assists while blocking four shots.

The Lakers played solid defense in the fourth quarter causing the Nuggets to miss 11 straight shots. Carmelo Anthony led the Nuggets in scoring with 31 points, despite shooting nine-of-23 from the field.

The Nuggets are now on the brink of elimination and will have to bounce back at home on Friday. The Lakers have to continue to put the pressure on the Nuggets by playing well defensively, getting a contribution from everyone while getting Pau Gasol more shots.