When the NFL started in the early 1890s, players wore shirts and rubber helmets. Players played with broken bones, tackling as low as the knee was permitted, and the only thing that players cared about was scoring.

It was the toughest, meanest sport in the country, and by the time it became the NFL and players like Dick Butkus played, it became the most popular sport.

When you mention the best defenses of all-time, the 1985 Bears are the first team that comes to your mind, and it's because the referees let them play the game. The players could hit and not worry about a flag being flown.

However, times have changed, and it's getting a bit ridiculous.

A new rule was passed today where if a defensive player is on the ground next to the QB, he cannot lunge at the QB like Bernard Pollard did to Tom Brady last season. You can swipe at the QB's legs and feet with your hands.

Are you kidding me? Defensive players' job on defense is to get to the ball, and if the QB has the ball, your job is to get to the QB. If that QB wants to stay in the pocket while it's collapsing and players are closing in around him, then he is taking a risk to get sacked and possibly injured.

The QB rules began with the roughing the passer penalty. After the QB throws the ball, if you even breathe or look at him the wrong way, a flag will be thrown. The NFL feels that the QB is defenseless after throwing the pass and that he should not be hit.

Now they are trying to protect him in the middle of a play, with 200- to 300-pound NFL players that can lift cars hitting each other. Now the NFL is making NFL players think before they hit, making the game far less attractive. 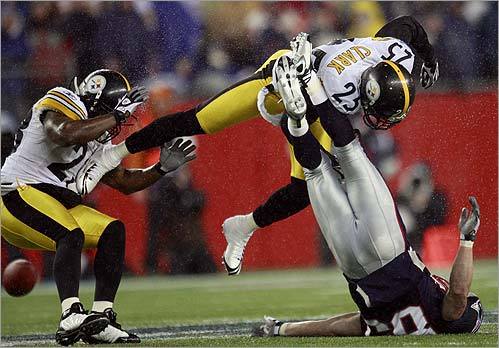 This hit that Ryan Clark had on Wes Welker has also caused a new rule to be issued by the NFL. If you hit a player in the chest, shoulders, or on the helmet with your helmet, it is a 15-yard penalty.

First, I can understand that the NFL is trying to stop helmet-to-helmet hits. Most of the time when that happens, it ends up with neck injuries that could end careers.

However, the NFL is now taking away the whole upper body. Players in the NFL are some of the fastest players in the world, especially cornerbacks and safeties.

The NFL is making these players control their bodies that are being flown all over a field when they hit a player. This is absolutely ridiculous.

Cornerbacks are already getting way too many penalties called on them as it is. If a cornerback does so much as touch a receiver 10 yards down the field, a flag is thrown for holding.

There were so many times this season on third down where a cornerback barely touched a receiver, and it was an automatic first down. It's ruining the game, it's pissing off fans, and it's making the NFL a sissy sport.

Message to the NFL: Let the players play. I understand that there need to be rules, and there needs to be structure, and you need to keep your players safe. But this is turning into a babysitting game, where fans need to hope that defensive players don't touch the opposing team.

In a game where the point is to hit the player with the ball, and players are wearing pads and a metal helmet, let the men hit each other. Get back to the days where Dick Butkus and Ray Lewis were dominating defenses—where linebackers making big hits made the highlight reel.

Let the analysts on Monday Night Football show the top five hits of each week and not the top five mess-ups. If not, the NFL will slowly start losing fans, and in an economy like today, that's not what the NFL can afford.

With the history that the NFL has, why change it? What's great about history is being able to compare players of the present to players of the past. Kobe Bryant and Michael Jordan. Alex Rodriguez and Babe Ruth. Who can we compare to the NFL greats?

We can't, because each season, the league changes the rules, which makes the game less and less like the way it's supposed to be. The NBA and MLB have been the same since they started, with a few rule changes here and there, but nothing like the NFL is doing to their game.

So stop—before the fans stop first.