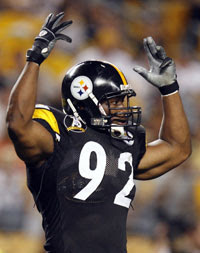 It's been a long standing tradition in American sports history that when a team (seemingly any team) wins a championship they get to go to the White House and meet the president.

Sometimes the mixing of athletes and political figures can create an awkward moment. However, for the most part the whole thing is just a good photo opportunity for all involved. As the Pittsburgh Steelers prepare to make their visit to the White House and celebrate their Super Bowl victory, there is one player who will not make the trip, actually he is flat-out refusing the invitation.

James Harrison was one of the most feared men in the NFL last season. He had nothing short of a phenomenal season. He capped off the 2008 campaign by making one of the greatest plays in Super Bowl history as he rumbled nearly 100 yards for a touchdown.

There is no doubt that the Steelers wouldn't have made the Super Bowl, if Harrison was not on the team last season. Now it appears that Harrison is ready to make his impact off the field, by turning down the invitation to travel with the Steelers to Washington D.C. to meet President Obama.

According to a report from Pittsburgh News affiliate Chanel 4 Action News, James Harrison is refusing to make the trip to Washington D.C. Harrison had the following to say about the whole situation:

"This is how I feel—if you want to see the Pittsburgh Steelers, invite us when we don't win the Super Bowl. As far as I'm concerned, he [Obama] would've invited Arizona if they had won."

While that is true, it definitely comes across as arrogant that Harrison feels that it should be Obama who is honored to meet him and not the other way around. I suppose that James Harrison's offseason is just too busy to take a day out to visit the president.

I mean really, how busy can Obama be that he doesn't take time out to visit the star linebacker on his own time? While I understand where Harrison is coming from, you've got to sit back and think seriously: who does this guy think he is? I'd actually prefer it if Harrison had refused the White House visit because he was making a political statement.

With behavior of this nature, it is not surprising that half the NFL seemingly gets arrested on a regular basis.

It should be noted that Harrison also refused to go to the White House in 2006 to meet President Bush. I guess he was too busy on that day as well.

Trevor to Be Limited for Camp

Trevor to Be Limited for Camp

SF to Focus on Lance at Camp

SF to Focus on Lance at Camp