The International Ice Hockey Federation (IIHF) announced a new policy and punishment for “contract jumpers” prior to the medal rounds of the IIHF World Championships, Jeff Klein of the New York Times reports.

Contract jumpers are those players who violate their contract with one league to go play in another league, in other words, Alexander Radulov. 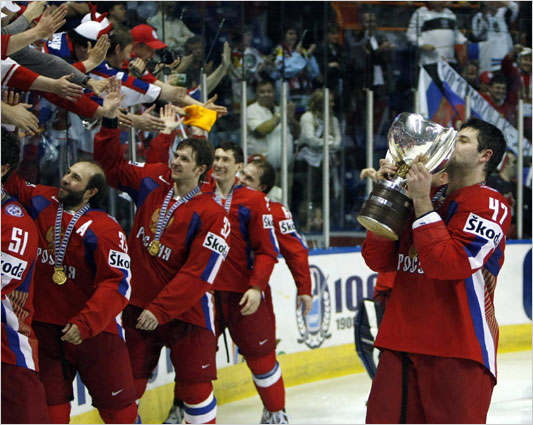 The new policy is a direct response to the Radulov case that occurred last off-season when he neglected a current contract with the Nashville Predators for a new contract with Salavat of the Kontinental Hockey League.

According to the old policy, players could break contracts and start playing immediately for their new league. I am not schooled in legal procedures, but how is violating contracts legal? And how is it written into details of a governing body?

Re-writing the rules that allowed contract jumping is far overdue. The IIHF should have reviewed the old rules as soon as Radulov signed a contract with Salavat and changed them immediately to prevent this sort of thing from happening again.

Although the action is late, it is a policy that protects teams on both sides of the Atlantic and therefore, the correct tactic taken.

With this announcement of new punishments, should Radulov even be playing in the championship game of the IIHF World Championships, since contract jumpers are now set to be suspended from international play for one to three years?

This also means that Radulov will not participate in the Olympics for Russia in 2010.

Radulov was set to meet with Predators’ General Manager during the World Championships to talk about a comeback to the NHL.

With these new policies set by the IIHF, it is now uncertain whether or not Radulov will get the opportunity to play with the Predators anytime soon.

On a side note, congratulations to Radulov for his awesome goal celebration against the Americans. This came a few minutes after Ilya Kovalchuk’s pre-mature celebration.