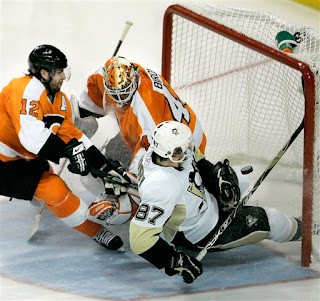 Following up on the pseudo hockey-centric post from yesterday, below are highlights of Game Four from the Pittsburgh Penguins vs. Philadelphia Flyers Eastern Conference Quarterfinals of the 2009 Stanley Cup Playoffs.

While I've been thoroughly disappointed not to have seen the one and only Don Cherry yet during these playoffs I have been equally ecstatic about the play of the Penguins.

Some might consider the goals the Penguins have scored to come from lucky bounces, but I contend it has clearly been the work of a swarming offense that has found itself in the right place at the right times.

Don't believe me? Just watch Sidney Crosby's goal 1:29 into the video. As the goal was being reviewed the play was shown about at about five different angles for roughly seven minutes.

Based on my rudimentary knowledge of the game, the shot was deemed a goal because it was tipped off of Crosby's stick and then deflected (albeit off Crosby's arm) by himself into the net before the post became ungrounded from its bearings.
With the series at 3-1 in favor of the Penguins, the two teams will head back to Pittsburgh for Game Five tomorrow night at 7 PM EST on Versus.
The front office is calling for a "Whiteout" and the timing feels right for the Penguins to advance to the Eastern Conference Semifinals, especially since 91% of teams leading 3-1 in Stanley Cup Playoff history have gone on to win the series.
The Penguins will most likely face the Boston Bruins, who hold a 3-0 series lead and are up 4-1 in the 3rd period of game 4 against the Montreal Canadiens.
Let's go Pens!