Will a porous defense spell doom for the Houston Rockets?Scott Halleran/Getty Images

The Houston Rockets' young core of Jeremy Lin, Chandler Parsons and James Harden have a lot to be proud of this season.

Houston's talented trio have propelled the Rockets to a seventh seed in the West in just their first season as a unit, and all three are a big reason why the Rockets as a team lead the NBA in scoring with over 106 points per game.

That being said, the Rockets shouldn't get too high on themselves, especially with the impending gauntlet of the NBA postseason awaiting them.

Wait a minute. Leading the league in scoring, a talented core of guys all under 25, an impending playoff berth—what exactly should the Rockets be worried about?

Well, in basketball, you play on both sides of the court, and with the playoffs right around the corner, the Rockets must address the glaring issue of defense if they're to have a remote chance of beating the likes of a San Antonio or Oklahoma City in a seven-game series.

The Rockets are the second-worst team in the NBA as far as opponents' points per game with over 102 per game. Opponents are shooting over 50 percent per game against them (going by effective field goal percentage), and the Rockets only get about four blocks per game—the third-worst mark in the league.

They simply allow opposing teams to score too much, and they just aren't intimidating other squads by manhandling them or swatting away shots—all important ways teams can impose their will or set the tone defensively.

Despite a current three-game win streak that includes a win over San Antonio, the Rockets recently had a very rough game against the Warriors that exposed a lot of their defensive flaws.

In that game, the Warriors shot 50 percent behind the arc with over 13 made triples, and the Warriors' backcourt of Stephen Curry and Klay Thompson torched Houston for a combined 45 points.

While the Rockets have played well as of late, that game should be a point of concern since they were eviscerated so badly. Despite their defensive woes, the Rockets have done pretty well considering they score the ball which such intensity and speed.

The Rockets offense is triggered either by drive and kick situations, turnovers leading to fast breaks or James Harden doing what he does best, but their high-powered attack will only get them so far.

Against the three top-seeded Western Conference teams this season, the Rockets are 2-7 with a single win against the Thunder and Spurs, respectively, and neither win was convincing.

A three-point win over OKC and a go-ahead basket by Harden against the Spurs won't conceal the fact that the Rockets have struggled mightily at times to stop other teams from scoring.

Frankly, the Rockets don't have the collective personnel to be an elite defensive team. Lin is cerebral but lacks the physicality and lateral quickness to stop guards like Russell Westbrook or Tony Parker. Omer Asik is a tough, physical rebounder, but he alone cannot plug all of the holes in Houston's lackluster perimeter defense when he rotates on missed assignments or helps when someone is beat.

Harden isn't terrible, but he is prone to silly fouls, and he seems to ball watch a bit too much rather than focusing on his man—a cardinal sin on defense.

Despite Lin and Harden being unimpressive defenders, Chandler Parsons is a legitimately good defensive pest, and his efforts in the past have even earned praise from some of the league's best.

For the Rockets to really lift off in the upcoming playoffs, they need to stress a collective effort on the defensive side of the ball. Despite the importance of individual matchups, basketball is as much a team game on defense as it is on offense.

The Rockets need to sharpen their rotations and get back on defense if they are to have a chance at stopping the Spurs or Thunder—two teams that can push the pace and destroy teams who neglect to run back after shots.

Houston is an even 17-17 against teams .500 and above, which is more evidence that they have gotten away with beating a lot of subpar teams. But in the playoffs, there are no bad teams.

If Houston intends to prove it belongs in the championship contender conversation, it needs to make a statement by showing commitment to defense in the upcoming playoffs.

If the Rockets can take one small step in improving how they defend, it would certainly make for one giant leap towards a championship. 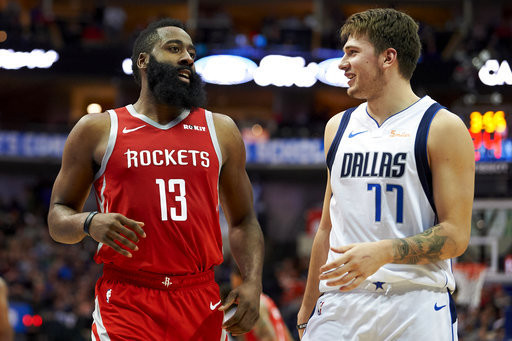