It’s hard to beat the pedigree of a Memorial Cup-winning goaltender, but Dustin Tokarski does hands-down, giving the Montreal Canadiens a significant edge in a trade, albeit a relatively minor one, made Thursday.

In a swap of two goaltenders, each of whom has won Canada’s national junior hockey championship, the Habs acquired Tokarski from the Tampa Bay Lightning in exchange for Cedrick Desjardins. Tokarski, you see, has also won gold at the World Junior Ice Hockey Championships.

And once Fleury’s eligibility had run out, Desjardins wasn’t even invited to the 2005 tourney’s camp, which yielded that infamous gold-winning, all-star team that featured Sidney Crosby and Ryan Getzlaf up front, Shea Weber and Dion Phaneuf on the back-end, and the venerable goaltending duo of Jeff “not even Tanner” Glass and Rejean “played in the Central Hockey League last season” Beauchemin.

Those two last names of course point to the fact that making Canada’s world junior roster does not necessarily mean you’ll go on to achieve great success in the NHL.

Martin Brodeur, for instance, never made the cut while former Toronto Maple Leaf prospect Justin Pogge, who won gold at the 2006 tournament, has fallen so far off the map, he’s literally playing for a top-level team in Italy right now, which, let’s be honest, is a bit of an oxymoron.

However, while the World Juniors don’t mean everything, they do at least indicate ability to a certain extent, and winning gold, something Fleury was never able to do, definitely shouldn’t be held against Tokarski. Combined with his 2008 Memorial Cup win with the Spokane Chiefs, it’s clear he’s capable of great things.

Granted, great things in this case might very well end up being back-up duty for maybe 15 NHL games every year for Carey Price, but it’s something. It’s also something Peter Budaj, with a 4.33 goals-against average and a .866 save percentage in two starts, has failed to do this year.

Considering Budaj will be an unrestricted free agent at the end of the season (so will Desjardins), Montreal needs—forgive the pun—a backup plan. That could very well be Tokarski.

Desjardins, who won the Memorial Cup in 2006 with the Quebec Remparts, isn’t a bad goalie, but he’s been a career minor-league goalie up to this point for a reason. There’s conversely little reason to believe that will ever change.

He’s 27, nearly one year older than Pogge, to put it in perspective, and Pogge is about as far away from a job in the NHL as Secretary of Education Laura Roslin was from the presidency in Battlestar Galactica (43rd in succession).

So, if that’s what it will take, a planet-wide attack on the part of homicidal robots, to give Pogge a realistic chance, it begs the question: Will hockey even be worth watching at that point? And will robots be playing? Because, if so, it might actually very well be.

There’s little denying which of the two goalies has had more professional success up to this point. In fact, it’s Desjardins who has more wins in the National Hockey League, coincidentally with Tampa Bay after the Lightning acquired him the first time from the Habs in 2010 for Karri Ramo.

In fact, the only thing that is absolutely clear with Price in nets is that this deal is actually quite inconsequential in the grand scheme of things. Nonetheless, one has to think over time their stat lines will at least converge and show not nearly as much of a discrepancy.

With Tokarski only being 23, time is also very much on the side of the Habs. Whether that time results in Tokarski developing into a solid backup, who knows at this point?

The bottom line, put bluntly, is Montreal just traded an unproven, unrestricted free agent at the end of the season for a restricted one who has a higher ceiling. That’s a win. Hopefully it will be the first of many with Tokarski in a Habs jersey.

About Last Night: Domi was the Habs' best player against Vancouver, but it wasn't enough

About Last Night: Domi was the Habs' best player against Vancouver, but it wasn't enough

In the Habs' Room: 'We have to get that last goal,' Max Domi says

In the Habs' Room: 'We have to get that last goal,' Max Domi says 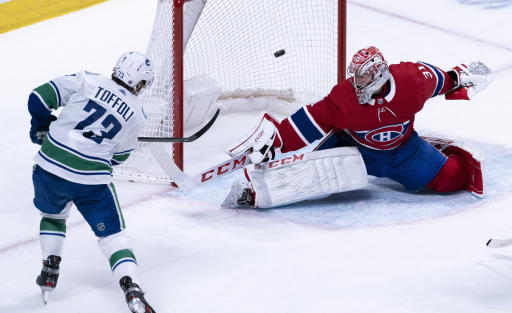