Sometimes we say things in the heat of the moment and don't realize what was said until it’s too late. Once we have a chance to calm down and reflect on things said, we then hope that everybody who heard it will show compassion and forgiveness.

Ohio State head coach Urban Meyer said something that he didn't quite mean after the 26-21 victory over the Michigan Wolverines. His team had just ran the table and finished with an undefeated season for the first time since 2002. The confidence and cockiness was oozing out of his body, and then Meyer dropped what nobody expected to hear:

What? One of the best Ohio State teams ever?

Despite not being eligible for a bowl game this year, going unbeaten in today's college football era is impressive. It was Meyer's first season as head coach of the program, it was going through a rough period of not being able to compete for the postseason, and even the most talented teams in the country usually slip up at one point in the year.

Ohio State deserves all the credit from the college football world for its accomplishments, as it would have been easy to give up at certain points in the season. However, let's not get carried away and label this one of the best teams in program history just because of an undefeated record.

For starters, the Buckeyes haven't exactly beaten anybody this season. Playing in the Big Ten really made this a cakewalk of a year for the team, as there were only three victories against ranked opponents all year long. If the team played Michigan State a little later in the season, you would have been able to remove the Spartans from that list, meaning only two respectable teams were on the entire schedule.

That is also without mentioning that Ohio State struggled against teams such as California, Indiana and needed a fourth-quarter comeback and overtime to beat a 6-6 Purdue team. Simply put, you could make a solid argument that the Buckeyes are only undefeated by default because of how weak its opponents were this year.

As for the team, the passing game was nonexistent all season long. The defense was shaky at best throughout the year, allowing over 400 total yards a total of four times. The unit also allowed 20 plays over 30 yards coming into the big game against the Michigan Wolverines.

But don't just take my word for it—Meyer has shown his displeasure for the entire defensive side of the ball many times this year, according to Doug Lesmerises of the Cleveland Plain Dealer.

"I'm not happy at all with what's going on on defense. Meyer said earlier in the year. That includes players, coaches, and I think we can all get better. It's a team effort. We've got good coaches, good players and we'll move forward and get better."

Meyer also found time to complain about his offense throughout the season, particularly in the beginning of the year when he was looking for playmakers to make his spread offense work. According to Tim May of the Columbus Dispatch, Meyer wasn't happy with the lack of game-changing players on the offensive side of the ball.

“At Ohio State, you should walk off the field going, ‘Wow! Who are those two guys,’ ” Meyer said. “I still today haven’t done that.”

The Buckeyes coach has said throughout the year that his team has had a long way to go before becoming national championship-worthy. He has never been shy of expressing how he feels with his current squad, and it has always seemed more than coach-speak when somebody is just downplaying his team’s performances to keep an edge.

Now this team is one of the best ever in Ohio State history? Nonsense.

But even if Meyer truly did feel this was a legendary Buckeye squad, could it really compete with some of the best in program history? Ohio State produced the 2002 national champions that went on to beat five ranked opponents, including an undefeated Miami (FL) team (which is widely considered to be one of the best teams ever).

You also had five national championship clubs coached by Woody Hayes that really bulldozed its way through the college football landscape for many years. This doesn't even include other teams coached by Jim Tressel and John Cooper that went on to win the Big Ten with ease.

Ohio State is a program that has produced seven national championships, 34 conference titles and has produced dozens of All-Americans. Although the record will go down in history and is something to be proud of, this isn't a legendary team that will be talked about for years to come.

After all, the guy coaching the team has said there is plenty of room to improve.

Meyer will soon hope that not too many heard his comments after Saturday's victory and hopefully will be forgiven for speaking in the heat of the moment. 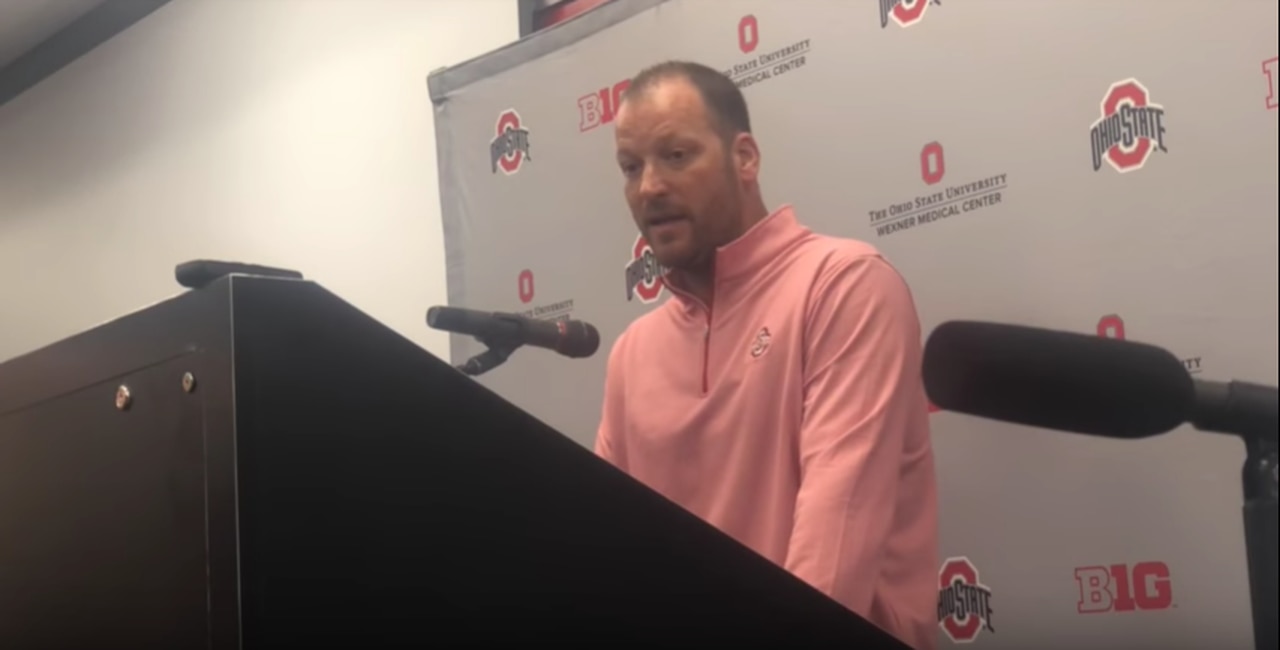 Griffin Strom
via The Lantern