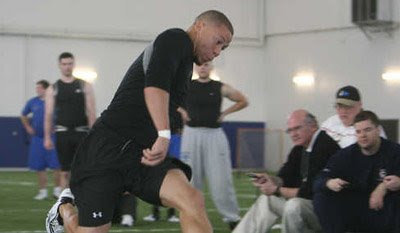 Must be the shoes...

After Ian Johnson turned heads and calmed nerves at the NFL Scouting Combine last month many just hoped he would sit back and ride out the wave of goodwill till Draft day.

Ian wasn't hearing any of that. On St. Patrick's Day, IJ took to the FieldTurf again to show the scouts what he's got, and once again, impressed those in attendance.

Johnson, who wisely chose to stand on his Combine 40-time of 4.4, ran agility drills for about 12 NFL scouts at the Caven-Williams Complex on Tuesday afternoon and garnered high praise from the reigning BMOC, Coach Pete:

“He’s as big as he’s ever been and moving as well as he’s ever moved,” Boise State coach Chris Petersen said. "He looked fast and he looked powerful.”

Chrissy must be slipping some whey protein into the Hamburger Helper.

Also showing off for the scouts were Vinny Perretta and Jeremy Childs. Perretta may have piqued some interest from scouts with his blazing 40 times of 4.48 and 4.43 as well as some solid numbers in the agility tests.

Childs must have improved his stock, as he was able to make them forget his so-so Combine sprints by finally posting some sub-4.5 marks.

All-in-all...a good day for the newly-minted Bronco alums. Hopefully we'll see all three of the aforementioned sneak onto Kiper's big board.