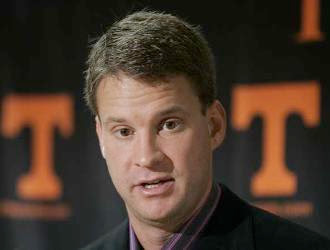 I have wrote about Lane Kiffin at Tennessee a number of times already. He seems like a walking recruiting violation and has called "out" about every program in the SEC after just only being on the job for about three and a half months.

We all remember Steve Spurrier's classic line when he was at Florida: "You can't spell Citrus (Bowl) without a U and a T". Well that U and a T now has a guy that go head to head with "the old ball coach" and spit out his own lendgardy one-liners during a late night signing day eve recruiting call with soon to be South Carolina commit Alshon Jeffrey.

According to Jeffrey and Wilson, Kiffin told Jeffrey that if he chose the Gamecocks, he would end up pumping gas for the rest of his life like all the other players from that state who had gone to South Carolina.

Lane, thank you for making a boring offseason, not so boring.