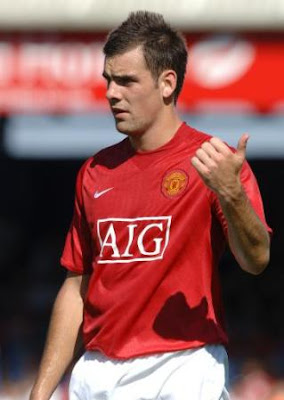 Manchester United midfielder Darren Gibson put on a great display against Derby County in the FA Cup, winning the Man Of The Match according to ITV.
Having scored yesterday and in the third round against Southampton, he is one of a few United youngsters who have stepped up to the mark this season, when injuries have forced the managers hand.
However, Gibson refuses to get carried away by talk of a guaranteed place in the United line up at Wembley in the Carling Cup Final.
Gibson has played in every round of United’s path to the final, and manager Sir Alex Ferguson has publicly promised the Republic of Ireland international a place against Tottenham at Wembley on 1st March; however, Gibson won't  be getting too excited until he receives the call.

“The Carling Cup has been good for me this year so fingers crossed I will play in the final, but the manager has not told me anything yet,” said Gibson. "I don't mind playing on the right but central midfield is my proper position, I feel more comfortable in there but to be honest, I am just happy to be on the pitch. In training I have been working on trying to get into the box and having a few more shots. I am glad I scored but the main thing is we got through.”

I think players such as Gibson, Danny Welbeck and Rodrigo Possebon along with Nani deserve a tilt at starting the Carling Cup Final. They have been called into action with United's huge injury list at times this season and they have stood tall and shown determination and great cohesion when needed. This will be a great day for them if they do start, and with United holding the likes of Berbatov, Rooney and Tevez in reserve, they can be called upon if needed.....More Manchester United News From Carly