In case you haven't noticed, the Seattle Mariners will probably be sellers once again this year come the trade deadline.

As we approach the month of July, discussions about potential available players and deals will be hot and heavy with teams looking to make a deal or two.

Going into the season it made sense that the M's would be looking to sell about now with a handful of veterans like Chone Figgins, Franklin Gutierrez, Jason Vargas and Brandon League serving as potential candidates.  And yet a mixture of injuries, age and poor play have made each of them considerably less valuable than originally anticipated.

Could any of them be moved in the coming weeks?

Sure, but don't expect general manager Jack Zduriencik to get much in return.

Yet what other options should Trader Jack consider in order to help the rebuilding process?

Larry Stone of the Seattle Times tackled this question a few days ago and offered his thoughts on the M's options, including whether or not to trade Ichiro or Felix Hernandez.

It seems that every year the M's face this question for both players and once again I just don't see it happening in either case.  In short, Ichiro is too old and expensive.  Felix is too young and valuable for the franchise to surrender at this point.

So who is left?

At this point I offer one potentially risky proposition: Kyle Seager.

However, isn't Seager the team's only consistent offensive spark plug this season, perhaps capable of hitting 20 home runs and driving in 100 runs by the end of the year? 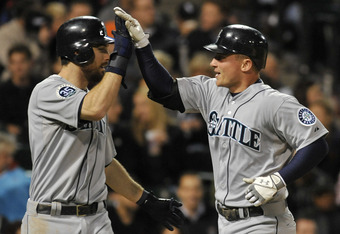 Could he, of all the Mariners' young nucleus, be legit in the long term?

All fair points, but didn't the M's have a similar situation last year with Michael Pineda?

If you recall, Pineda was an All-Star as a rookie in 2011 who looked like a sure-fire ace.  Then over the course of the season's second half, he started to look a bit less dominant as he started to wear down.  This winter the Yankees and their GM, Brian Cashman, worked out a deal with Jack Z for Pineda that netted Jesus Montero.  At the time it sounded crazy and it could someday come back to haunt the Mariners, but it was certainly gutsy for Jack Z to take a chance in dealing from strength.

Assuming the Mariners have little to no intention of adding salary in the near future through free agency, the only way this team can amass solid talent beyond the draft is to consider deals like the Pineda/Montero swap.

Seager is currently playing third base, but it's not his natural position, which is really second base.  Right now the team has its long-term solution at second in Dustin Ackley.  Thus far in 2012, Ackley has suffered from a sophomore slump.  Yet one would imagine he will eventually rebound either this season or next, given what he showed us in 2011 during his rookie campaign.

OK, but why not just keep Seager at third base?

In addition to Seager, the M's have a handful of young prospects capable of playing the position within the farm system including Alex Liddi, Vinnie Catricala and Francisco Martinez.  Naturally, none of these players at the moment is doing much to make Seager seem expendable, but in an ideal world, one should be capable of taking over the hot corner for the Mariners within either this season or next.

Seager is perhaps one of the few encouraging stories for the M's this season and deserves serious consideration for the AL All-Star team.  He has in one-half season exceeded just about everyone's expectations after barely making the roster out of spring training, but I'm not sure he can keep up this pace.

In the past month his batting average has dropped nearly 30 points with the majority of that time hitting within the heart of the order.  Granted, that's just one metric, but could we be seeing the start of a second-half swoon?  Will Seager end up a one-year wonder?

To Seager's credit he's fought hard to cement his status as a clutch performer in a lineup that has yet to find a leader.  Seager has proven himself more than capable of being an every day player, but determining his ceiling is quite difficult at this juncture.  Hence the likely reluctance of the M's even considering to make a move.

Yet if I'm Jack Z, I may not hang up on the phone so quickly if someone comes calling to ask with a serious offer rivaling that of what the Yankees made for Pineda.

In this case, the M's can once more sell high on a talented ballplayer who may well come back to earth either this season or next, while netting a potential stud in return.

Anything less and the answer is no, even if it means ridding the team of Chone Figgins and his contract.

Understand, this is extremely risky, borderline crazy, and will probably generate a fair amount of angst, but the Mariners need to get creative in order to change the current dynamic.  Nobody in Seattle may want to trade Seager today, but for the right price it may be foolish not to listen.