Racin’ with Russ - With the most recent racing results for either Busch brother so far this season being empty in the win column, who would have thought that both Kyle and Kurt would leave the Virginia racetrack in Richmond with trophies and accolades from both the Nationwide and Sprint Cup series races.

Kyle wrapped up the weekend by winning the Sprint Cup 400 race on Saturday night after it appeared that either Carl Edwards or Tony Stewart would be the winners by Carl leading the most laps and Tony leading late in the go with a very strong car. Neither did. Mark Martin kicked off the weekend with his 53rd pole position, this one barely eclipsing Edwards for the top spot. Martin led briefly before Kevin Harvick showed the fast way around, then watched Edwards zip by and lead the most laps handily. Edwards lead was eclipsed by Stewart as his car got stronger and Edwards’ faded.

With 90 laps remaining, there was a mix up by NASCAR as to who was the leader on a restart, Tony or Carl. They told Carl’s spotter three times, they were the leader and the infield leader board said they were the leader. Edwards found himself on the outside of the front row and brought the field to the stripe, but NASCAR felt he jumped the gun and penalized him after the start with a devastating drive-through penalty as Stewart pulled away. One more very late restart found Kyle Busch just barely edging Stewart out of the pits and stayed there enroute to his first win this year with Dale Earnhardt Jr not far behind.

The rest of the top five included Stewart, Denny Hamlin and Kasey Kahne. Edwards and crew was more than annoyed with NASCAR’s decision to the situation and rightly so. In my opinion, they should have redone the restart as they were just as much to blame as Carl. They should have had Tony out front with Carl second and redo the errant start. Edwards wound up a sorry 10th. The latest results has Greg Biffle barely ahead of Earnhardt with Hamlin moving up to third in the overall points picture.

The Friday night action at RIR found Kurt Busch in the lead after methodically working his way to the front of the field. Kurt was driving his brother Kyle’s Nationwide No. 54 Toyota who has been struggling to just finish with a top 10, let alone a win. Kevin Harvick started on the pole and led a bunch of laps, yet Busch was able to pass the full-time Cupster on the outside, exhibiting a very strong race car. Busch pulled away from the pack in the closing stages before noticing Denny Hamlin large in his mirrors over the final dozen laps. The two went side-by-side for the final two laps, trading paint and a little more as they approached the finish line with Busch edging the local favorite by less than a fender.

The two Busch brothers celebrated in the winner’s circle their first Nationwide team victory, Kurt’s fourth in only 15 starts. Finishing right behind Hamlin at the stripe were the cars of Harvick, Ricky Stenhouse Jr. and Sam Hornish Jr. The latest results finds Elliott Sadler just two points ahead of Stenhouse in the big points picture.

The Indy Car series held their latest racing venue on the beautiful street course in Brazil. Will Power managed to grab the pole and eventual win but not without a strong effort by the driver and Team Penske. The circuit is a street course converted to a race track and simply put, it’s tight. There are no real run-off areas, so a simple mistake can easily end your day early. Power’s latest win is the fourth in a row for Penske and third consecutive for Power, now easily the leader in the points. Capping the top five finishers included Ryan-Hunter Reay, Takuma Sato, Helio Castroneves and Dario Franchitti. The next event for the Indy Cars is the famed Indy 500 with first round qualifying on May 19. 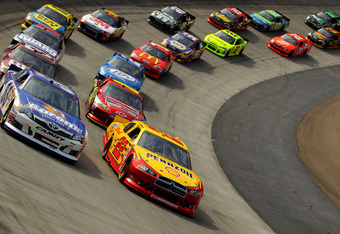 Bristol Motor Speedway officials announced their plans for the high speed banked track of which they’ve already started construction. They are going to grind away the upper lane next to the wall at both ends of the ½-mile track and eliminate the progressive banking in those areas in hopes of better side-by-side racing come this Fall. Me? I say they should have dug up most of the track and returned to exactly the way it was before the introduction of the progressive banking. They would also be better served to lower the price of admission and have the track put some kind of pressure on the local hotels and motels from overcharging the race fans on race weekends. What do you think? Drop me a line.

That’s it for this week. Next week, RWR will review the NASCAR rounds from the big Talladega racetrack in Alabama along with more racing news from around the globe.

Was Altman's bizarre deadline deal the start of a bigger plan?