With defenses playing a significant amount of 1-gap concepts, defenses are using more shaded techniques opposed to head-up techniques that are typically associated with 2-gap concepts. A 1-gap concept gives a defensive lineman a single gap to be responsible for, which allows him to be more aggressive downhill, and one of the techniques that is nowadays common in 3-4 and 4-3 1-gap schemes is the 3 technique.

In a 4-3 front, the 3 technique is long known for being a fixture as the pass-rushing maven of the two interior defensive lineman.  One of the most well-known pass rush demons at the alignment was former Tampa Bay Buccaneer and Oakland Raider Warren Sapp, a dominant defensive tackle with great initial quickness that jolted blockers at the snap of the ball.

However, in a 3-4 front, the 3 technique defensive lineman was not once as popular as it is today. Not too long ago, 3-4 defenses were known for their 2-gap schematic style that saw a 0 technique nose tackle that was head up on the offensive center while two 4 techniques aligned across the offensive tackles.

Although the 2-gap concept is still in use today, it is not as popular, as teams have shifted toward the 1-gap concept that enables them to use shaded techniques such as the 3 technique.

In the 3-4 defense, the 3 technique serves essentially as a reduced end because of the three down linemen, and is not often viewed in the same light as the 3 technique in the 4-3 defense. However, it is similar after the snap.

Despite the 3-4 defense having a difference in numbers in a two- and three-point stance, the 1-gap scheme operates as essentially a 4-3 defense after the snap due to the way the techniques, such as the 3 and 5, are played. This is particularly noticeable in the adjustment from the 4-3 and 3-4 Under fronts. 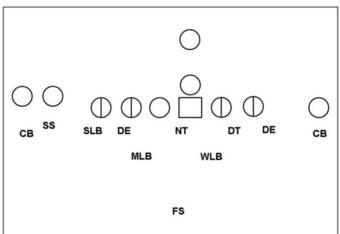 In the 3-4 Under front, it is the same thing with the exception of the weak side end (away from the tight end) in a stand-up 5 technique, which is often called an "overhang" or "ghost" rusher. 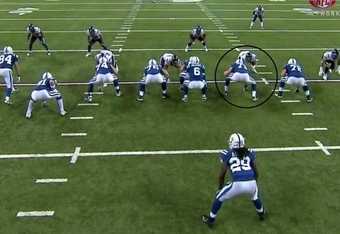 Because of these two fronts similarities, defenses are able to slide in and out of them with a simple hand down, man down or hand up, stand up thinking. This also creates more flexibility within the defensive front and enables the defense to offer more exotic looks to the offense, potentially confusing the offense's blockers and quarterback, as was seen this season by the New England Patriots and Houston Texans' defenses.

Chargers Move on from Rivers

Chargers Move on from Rivers

From shooting himself to losing his mentor, 49ers RB tells @TyDunne how he went from nearly quitting to playoff hero ➡️

Sometimes it's not who you know but what you know