The Oakland Raiders may not do much shuffling on the offensive side of the ball, but the 29th-ranked defense will be altered.

Stanford Routt has already been released, and new GM Reggie McKenzie promises even more change. Of the 11 positions on defense, only two have unquestioned starters.

Had the Raiders been healthy, the starters at the end of the season would have been nearly identical to the starters in Week 1. The lone exception would be Aaron Curry starting over Quentin Groves.

Since the Raiders will use both three-man and four-man fronts, we'll have to predict the starters for both schemes.

Last season, Shaughnessy was among the favorites during training camp to have a breakout, but he hurt his shoulder and missed 13 games. He'll return in 2012 and hope to revive the buzz he generated last offseason. Shaughnessy managed to record just one sack in three games in 2011 and will be ready to add to that total.

The introduction of the 3-4 will be very interesting for Shaughnessy, and his only scheme fit appears to be as an end in the 4-3.

Houston registered one sack in 13 games after registering five in his rookie campaign in 2010. He's stout against the run, but he can be neutralized when forced to rush the passer.

Houston's best opportunity to rush the passer comes from the defensive tackle position in the 4-3, but Richard Seymour will remain with the Raiders for at least another season.

Houston is scheme diverse and should be able to translate into a nice 3-4 defensive end. Instead of coming off the field on passing downs like he has the past two seasons, Houston will stay on field.

Kelly has been rumored to be on the chopping block, but he's a decent bet to return and should restructure the mega deal he signed in 2008. Kelly quietly put up a career year in 2011 with 7.5 sacks, two forced fumbles, five passes defended and one interception.

Houston gets the starting nod over Kelly at 3-4 end, but Kelly could be just as effective playing the 5-technique. The question with Kelly is if he is the right guy to defend the run or if he would be better suited for the 3-technique, a position locked down by Richard Seymour.

McKenzie made a commitment to Seymour when the deadline came and went that made half of Seymour's $15 million base salary in 2012 guaranteed. That means McKenzie will need to work out an extension with Seymour that reduces his cap number.

Seymour has experience running the 3-4 and 4-3 fronts and would start in both fronts. He'd continue to have good success as a 4-3 defensive tackle from the 3-technique and would start at LDE as a 5-technique defensive end. He's one of the few locks on the defense. 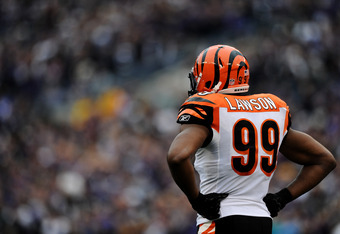 Aaron Curry played well after coming over from Seattle, but there was a reason he was traded and he's due $5.7 million in 2012. It's hard to imagine the Raiders wanting to pay Curry anything close to what his contract has paid him to this point, and that will force the Raiders to go in a different direction.

The Raiders will look for a more affordable option in free agency, and hopefully they will find an OLB who is equally effective in the 4-3 and 3-4 defenses. There aren't many OLB options in free agency, so this will be one of the more interesting positions to watch.

Lawson has experience in both schemes and with defensive coordinator Jason Tarver.

Lawson isn't great at rushing the passer, but he uses his natural athleticism. He's underrated in coverage and a good defender against the run. He's a well-rounded linebacker who is being undervalued by the rest of the league.

It's a make-or-break year for McClain. Playing more of the 3-4 defense will take some of the pressure off of McClain, and he should be able to play faster. However, effort has also been an issue with McClain and that's something Dennis Allen and his staff need to address right away.

Despite lackluster play to this point in his career, the Raiders will give McClain his chance at redemption. It's up to McClain to take advantage of his second chance and silence his critics.

The Raiders don't have a lot of cap space and will find it difficult to add a ILB in free agency. Travis Goethel is a huge unknown, but he'd be a consideration for this position as well.

Dennis Allen was calling in the plays to Mays in Denver, and the familiarity will help the Raiders defense get up to speed in Allen's defense. Mays shouldn't break the bank, and he'll play in 3-4 alignments and provide competition for McClain as at MLB as well.

There has been a lot of talk about Wimbley and how he'll be released if he doesn't restructure his contract. The fact that this has all come out in the media suggests the Raiders are having issues negotiating with Wimbley's agent.

Wimbley has a ton of leverage, and the Raiders need to restore fiscal responsibility. The Raiders can release Wimbley and suggest it's part of the regime change in Oakland, but the truth is they want Wimbley back.

Something will get done at the last minute that keeps Wimbley in Oakland. 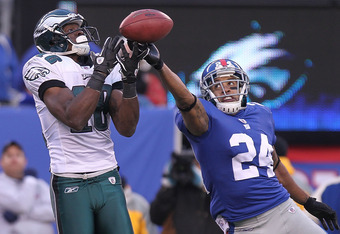 He's coming off an injury but has been a solid cornerback for the Giants for the past few seasons. He's more of a No. 2 cornerback, but the Raiders can't afford a top option.

When you think about which players can be signed to a reasonable contract and fit the new defensive scheme, Thomas comes to mind. He's a poor man's Cortland Finnegan.

The Raiders picked up ex-Packer Underwood as one of McKenzie's first signings. It would be easy to look at Underwood as a potential starter at cornerback considering he was signed shortly after the release of Stanford Routt, but that's a mistake.

The Packers were trying to convert Underwood into a free safety, something the Raiders should try to continue. If Underwood can stay focused, he's got enough talent to start. The Raiders need options in the secondary, and with a limited budget the Raiders will be forced to find a starter or two with minimum salaries.

The Raiders put the franchise tag on Branch and will continue to work on a long-term contract. Branch hasn't been featured in the Raiders defensive scheme to this point, but that should change.

Branch is an extremely underrated player in the secondary, and the fans will finally get a chance to see it in 2012.

Huff has a huge cap number but recently tweeted how excited he was about Dennis Allen's defense. That would be an awkward conversation if McKenzie planned on releasing Huff.

Huff likely will or has restructured his contract to be more favorable for the Raiders, and the Raiders may have a hard time finding solid cornerbacks in free agency.

Safeties aren't easy to find in free agency either, but McKenzie won't be able to justify the cost on two safeties so Huff will shift to cornerback.

Who has the advantage at tight end?