To say that 2012’s Daytona 500 was weird would be a huge understatement.

The first sign that this 500 wouldn’t be a normal race came on Sunday when, for the first time in its history, the Daytona 500 was postponed to Monday. While the original Monday race was set to start at noon, it was soon moved to prime time on Monday night due to rain.

The placement promised to bring in more viewers—ones that originally tuned into Fox to see new episodes of House and Alcatraz. But what they got was one of the weirdest races in NASCAR history.

Daytona’s caution-filled day started with a wreck on Lap 2 that not only took five-time champion Jimmie Johnson out of the race, it also forced hyped driver Danica Patrick to the garage for more than 60 laps.

Race viewers would see 10 cautions during the span of the race, but none would be more newsworthy than the caution on Lap 40.

The field was already on caution for a previous incident when Juan Pablo Montoya came off pit road. It looked like a normal track entry until the rear trailing arm on his No. 42 Target car broke, sending him into a jet dryer cleaning up the track.  The jet fuel-filled dryer exploded on impact, dumping 200 gallons of fuel onto the track in a blazing inferno.

The clean up of the racetrack took over two hours, and those on Twitter were entertained with jokes and conversations filling up timelines. But the most surprising tweets of the night came from someone no one expected to tweet: a driver on the track.

When the field was red flagged on the backstretch, Brad Keselowski revealed that he had his phone in the car by tweeting a picture of his view of the fire.

The driver continued to tweet during the break, keeping fans updated on what was going on with the track repair. Keselowski’s tweets finally made the NASCAR broadcast (and would get attention from other news channels after the race), and both fans and non-fans alike flocked to his page to follow him, forcing his number of followers to over 200,000 people, with several thousand coming during the red flag. 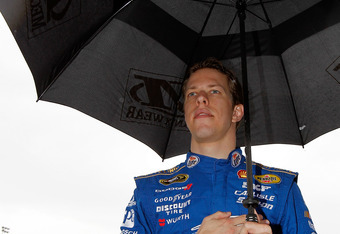 When the track was finally ready to go again, the Daytona 500 seemed to return to normal, with the regular closing-lap cautions and a finish that saw Matt Kenseth grab the checkered flag over Dale Earnhardt Jr. But even though the race didn’t end until early Tuesday morning around 1:00 a.m., there were still many fans watching. An estimated average of 13.7 million viewers watched at any given time, according to the Nielson ratings reported on Twitter by Jenna Fryer, with a peak number of 36.5 million—the second-highest of any NASCAR race ever.

Given the surge in ratings, it’s likely that the Daytona 500 gained some fans over the weekend. It has yet to be seen if these fans will continue to watch races this season and make their way into being full-time fans, but with at least one NASCAR driver willing to tweet from the car, it seems possible that the sport’s growth will continue in the coming weeks and years.

Oh, and as for a normal ending to Daytona? The track had one more trick up its sleeve, keeping drivers at the track overnight when North Carolina airports were closed due to fog.