The Los Angeles Angels have been focusing their offseason marketing efforts around their newly acquired future Hall of Famer Albert Pujols for obvious reasons. After signing a 10-year, $250 million contract, the All-Star slugging first basemen has naturally become the face of the organization and is the man responsible for a new-found excitement in southern California.

Part of that excitement has been generated by the addition of 20 "El Hombre" billboards in Los Angeles with a picture of Pujols proclaiming him as "The Man" in Spanish. Few will argue that Pujols is still the best player in baseball, therefore the billboard slogans appear fitting. It's catchy, it's short, it's creative and it's accurate, so kudos to the Angeles marketing team on a job well done. One problem though, Pujols hates it!

While spending 11 seasons in St. Louis, Pujols developed a friendship with Cardinal legend Stan "The Man" Musial. Pujols often pleaded St. Louis fans and media to stop referring to him as "El Hombre" to respect Stan Musial's nickname and it appears Pujols demands the same in Los Angeles.

Musial not only racked up 22 seasons in a brilliant Hall of Fame career, but he also served in the Navy during World War II and was recently awarded the Medal of Freedom thanks to his efforts with multiple United Service organizations and charities.

When asked about Musial, Pujols confirmed, "I still have the same respect for him as I had, not just for what he's done in baseball but for what he did for his country. That's something you have to appreciate." 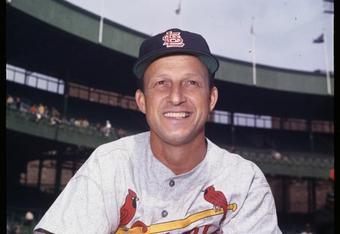 The Angels will honor Pujols' request and remove the slogan "El Hombre" from all 20 billboards and most likely replace them once a different marketing approach is created. But let's take a second and look at the big picture of this situation and appreciate how refreshing it truly is.

When I say "Superman" what athlete comes to mind? If you answered with Shaquille O'Neal you are correct. But wait, you are also correct if you jotted down Dwight Howard or Cam Newton. How about "LT"? Either Lawrence Taylor or Ladainian Tomlinson would be acceptable answers.

"A-Rod?" Yup, Alex Rodriquez, Andy Roddick and Aaron Rodgers should come to mind, and no you do not receive a discount double check for getting such a gimme of a question correct. What about "AI?" Allen Iverson has always been the answer, but don't forget about his Philly replacement Andre Iguodala.

Today's sports world is consumed with athletes constantly trying to one-up their predecessors in order to become the latest and greatest stars in the eyes of the fans and media. Many athletes are so concerned about creating a popular brand image for themselves that they don't care if the route they take to fame has already been traveled, just as long as they get there. But not Pujols.

Pujols has $250 million reasons why he can claim the nickname "El Hombre" without a single person questioning his decision. His remarkable stats could potentially justify calling him just about any nickname imaginable. For Pujols to actively speak out against being called "El Hombre" in honor of Stan Musial is not only a testament to his integrity, but also a breath of fresh air for the sports world. Kudos to Pujols, the dude deserves respect for hitting a home run on this decision.

Report: Zion to Start in Pelicans Debut vs. Spurs

Report: Zion to Start in Pelicans Debut vs. Spurs

Don't pull the trigger on these players