Miami has its wide receivers. USC produces quarterbacks. Penn State is Linebacker U. So what would Nebraska be known for?

Sure, Nebraska has a storied history of producing NFL talent. A list of Nebraska’s 10 best NFL products, of course, can be found on the pages of this very website.

But what would Nebraska be known for? Quarterbacks? Probably not. Running backs? Maybe. Offensive linemen? A good argument.

Pop quiz time. Which university had the most alumni with starting jobs as a placekicker or punter in the NFL last year?

(If the answer to that question wasn’t Nebraska, of course, this article wouldn’t make a lot of sense.)

And it’s not just Alex Henery, Sam Koch and Josh Brown. Since Nebraska’s national championship run beginning in 1994, NU has been blessed with extraordinary talent at punter and placekicker.

And that talent has been instrumental in the success Nebraska has enjoyed.

I know, I know, it’s fun to make fun of the skinny little kickers. But don’t kid yourselves, strength in the kicking game translates to wins on the field.

In 2004 and 2005, the Iowa State Cyclones would have won the Big 12 North and played in the conference championship game had their kicker been able to convert crucial field goals. 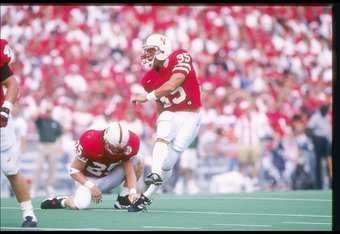 While Bowden’s Seminoles were finally able to get over the hump and win him a national title (ironically enough, on a missed field goal by Nebraska’s Byron Bennett), his history of “Wide Right I,” “Wide Right II” and “Wide Left” are stories of trophies and glories Florida State could have achieved with a stronger kicking game.

The Buffalo Bills went to four straight Super Bowls—an accomplishment that is far more remarkable than the team ever gets credit for. Had the Bills won even one of those games, their legacy would be far greater than being a punchline. (What’s the area code for Buffalo? 0-4-4). And had Scott Norwood’s kick been true, that legacy would have been redefined.

It turns out that Nebraska has really been on the cutting edge, looking past the stigma and stereotypes and ensuring that NU won’t be giving away games off the feet of its kickers.

So spare some love for the skinny little kickers. After all, they win games and provide some of the most exciting moments in Memorial Stadium’s history.

If you would like to contact me directly to schedule an interview, ask a question or to get my recipe for a killer peach cobbler, you can send an e-mail to patrickrunge@gmail.com. (DISCLAIMER: Peach cobbler recipe might not be all that killer.)