We consider the tapes of our coaching staff during our games against the New England Patriots to be a non-issue.  In our opinion, they had no impact on the results of those games. -Pittsburgh Steelers Chairman, Dan Rooney. Source: NFL.com

On Feb. 2, 2008, the Boston Herald reported that a member of the New England Patriots' video staff taped the St. Louis Rams' walk through on the day before Super Bowl XXXVI.  While the Boston Herald based its Feb. 2, 2008 report on sources it believed to be credible, we now know that this report was false, and that no tape of the walkthrough ever existed. Source: BostonHerald.com

For years now, I've had to hear about how the Patriots haven't won a Super Bowl since Spygate.  With the most recent loss to the New York Giants, that annoying comment has popped up more than ever.

The problem with it is, that people who make such comments as, "0-2 since Spygate," are completely ignorant of the facts.

Before I dive deep into this topic, let me start off by asking what's the point of even posting, "0-2 since Spygate?"  What point do you even think you're making?

The Patriots went 16-0 the year that Spygate was revealed following Week 1.  If anything, you're only helping the argument that Spygate had nothing to do with the Patriots Super Bowl victories. 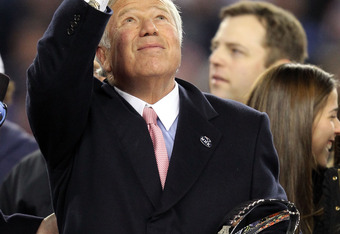 Yet you continue to bring up Spygate, because obviously that's why the Patriots lost the Super Bowl, right?  They just lucked their way to 16-0 and 13-3 and through the playoffs, but they need video tapes to win that big one don't they?

Of course, it couldn't possibly be that the Giants just simply have the New England Patriots number now could it?

In 2007 in the last week of the regular season, the Patriots played those New York Giants in what would turn out to be a preview of the Super Bowl.  They barely escaped New York with a 38-35 victory.

That goes to show you right there that they could hang with New England.  With two weeks to prep before the Super Bowl, that's plenty of time to adjust to things they did wrong in Week 17 in a game that could have gone either way to begin with.

Keep in mind, in those two Super Bowl losses to the Giants, New England had the lead in both of those games in the final minutes.  Eli led game-winning drives in both of them, leaving Brady with seconds, not minutes, to pull off any kind of miracle comeback.

Our defense has simply been unable to stop those last-minute drives, and that's the most annoying thing about the Spygate comments.  When people leave those Spygate comments, they aim them at Brady and the offense, when in actuality, the offense has set the team up for a win in the last two Super Bowls.  It's the defense that has allowed the Giants to advance downfield for the game-winning drives in the final minutes.

Let's also not forget in those two Super Bowls that each of their game-winning drives, they both had catches from David Tyree and Mario Manningham respectively that will go down as two of the greatest and most unlikely catches in Super Bowl history.

I could describe all day the lunacy that surrounds the comments that the NFL community makes on articles as they relate to our recent Super Bowl losses and Spygate, but I want to get down to the facts of Spygate, which is what those people are so ignorant towards.  I'd like to start out with a quote from former Dallas Cowboys coach and NFL on Fox analyst, Jimmy Johnson, after footage from the actual tape was aired on Fox NFL Sunday.

This is exactly how I was told to do it 18 years ago by a Kansas City Chiefs scout.  I tried it, but I didn't think it helped us.  Bill Belichick was wrong because he videotaped signals after a memo was sent out to all teams saying not to do it.  But what irritates me is hearing some reactions from players and coaches.

These players don't know what their coaches are doing, and some of the coaches have selective amnesia because I know for a fact there were various teams doing this.  That's why the memo was sent to everybody.  That doesn't make Belichick right, but a lot of teams are doing this.  Source: BostonHerald.com

That quote says a lot about the videotaping, especially where Johnson says, "I tried it, but I didn't think it helped us."  People don't seem to understand that this was common practice amongst all teams, not just the Patriots.

Belichick and the Patriots got in trouble because the league requested that the practice be stopped.  However, Belichick interpreted the new rule incorrectly.  Belichick believed the taping was legal as long as the tape wasn't used during the same game.  Below is an explanation of the taping rule:

No video recording devices of any kind are permitted to be in use in the coaches' booth, on the field, or in the locker room during the game.  All video shooting locations must be enclosed on all sides with a roof overhead.  Any use by any club at any time, from the start to the finish of any game in which such club is a participant, of any communications or information-gathering equipment, other than Polaroid-type cameras or field telephones, shall be prohibited, including without limitation videotape machines, telephone tapping, or bugging devices, or any other form of electronic devices that might aid a team during the playing of a game (ESPN.com and boston.com).

A quote from Bill Belichick:

My interpretation was that you can't utilize anything to assist you during that game.  What our camera guys do is clearly not allowed to be used during the game and has never been used during that game that it was shot.  Once we were penalized, the practice was immediately stopped.

Now let's move on to the Boston Herald's accusations of the Patriot's videotaping the St. Louis Rams' Super Bowl XXXVI walkthrough and the key whistleblower behind the alleged "scandal," Matt Walsh.

First of all, it's key to remember that videotaping was not against the rules until it became official in a 2006 memo, that's why this all came down because the Patriots continued the practice due to Belichick's misinterpretation of the rule.

Following the Patriots' Week 1 win against the Jets, former New England Patriots defensive coordinator and then Jets head coach, Eric Mangini, accused the Patriots of videotaping their defensive signals.  This was met with immediate action from Roger Goodell who reviewed the tapes and allowed samplings of the footage to be aired on FOX, as referenced earlier in the quote by Jimmy Johnson. 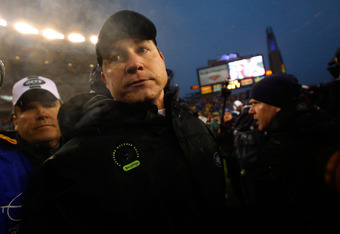 Goodell was quick to take action, and was criticized for destroying the tapes.  I can see how that can raise questions, but let's think about this for a moment.  Goodell is by far and away the most stiff and harsh commissioner the NFL has ever had.

He wouldn't let the Patriots off the hook for a major violation.  What Goodell found was "routine," but against the new rules nonetheless.  Goodell said of his findings that he found nothing that, "tainted the Patriots accomplishments."

Acting on this, the Boston Herald seemingly jumped to conclusions, and out of nowhere, published a story from, "an unnamed source" that the New England Patriots had videotaped the St. Louis Rams' walkthrough the day before Super Bowl XXXVI.

Following this accusation, NFL investigators immediately started looking into the allegations and found that indeed the Patriots video staff was at the Louisiana Superdome that day, but the video equipment had neither battery packs nor a power supply to run.  A Patriots employee who was with Walsh at the walkthrough quoted Walsh as saying, "We should have taped that."

As for the author who wrote the article for the Boston Herald, John Tomase, said he heard about the rumor back in September, after Spygate first broke.  He said he felt they had confirmed it in a way they felt comfortable with. 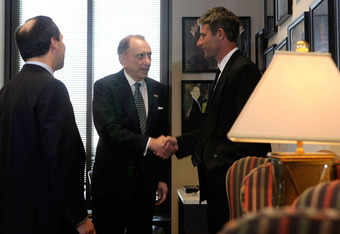 In response to these allegations, the Patriots gave their official response.

We want to address the allegation that the Patriots taped the Rams' walkthrough prior to Super Bowl XXXVI.  For the past three-and-a-half months, we have been defending ourselves against assumptions made based on an unsubstantiated report rather than on facts or evidence.

Despite our adamant denials, the report ran on February 2, 2008, the day before Super Bowl XLII.  That game was the second-most watched program in television history and it is unfortunate that today's news will not also reach an audience of that size.  We hope that with Matt Walsh's disclosures, everyone will finally believe what we have been saying all along and emphatically stated on the day of the initial report: "The suggestion that the New England Patriots recorded the St. Louis Rams' walkthrough on the day before Super Bowl XXXVI in 2002 is absolutely false."  Any suggestion to the contrary is untrue.  Source: Boston.com

The "disclosures" that the Patriots referenced was during his meeting with Roger Goodell.  Walsh brought tapes that were also shown to the media that showed coaches' signals, scoreboards and end zone views of plays.  Keep in mind, Belichick wasn't using this for the same game, so he thought it was fair play.  Goodell held a press conference stating that the tapes Walsh showed were consistent with what the Patriots had already handed over and had already been punished for.

This is where the "disclosures" come in.  Walsh, the same man who tried to bring down the Patriots, also turned out to be their biggest key witness.  Walsh told Goodell that there was, "never a tape of the Rams' walkthrough before Super Bowl XXXVI, that nobody asked Walsh to tape it, and that Walsh was not aware of anyone else who had."

The Boston Herald quickly followed up with an apology that was delivered by their Editor-In-Chief Kevin Convey who took full responsibility for the publication of the story.  You can find the apology at the top of this article.

Patriots owner Bob Kraft, however, was bothered that many people throughout the country would not see the retraction, and he was absolutely right.  As evidenced by the ignorance of many people who still think they know the "facts" because of false and damaging reports and to those that still post, "0-2 after Spygate."  It's a shame that people still think this is even considered a scandal.

But to those great NFL fans who want to actually reach out and do some research, educate themselves, aren't ignorant enough to believe that something that was being done by everyone and I guarantee is still going on today had any effect on the Patriots successes, we New England fans thank you.

Once this article has been read, it will really speak to one's ignorance if they still feel the same as they did before they read it despite testimonials from Roger Goodell, Dan Rooney, Jimmy Johnson, Matt Walsh, the New England patriots and the retraction from the Boston Herald.  But leave it to some fans to think they know more about the game and what went on behind the scenes than people who were actually involved.

I hope this article has brought everyone's knowledge of Spygate up to speed and that your opinion has drastically changed.

Breaking: AB Turns Himself in

Breaking: AB Turns Himself in

Cooper Says Free Agency Won't Be 'All About Money'

Cooper Says Free Agency Won't Be 'All About Money'