With Aaron Rodgers resting up for the Green Bay Packers' playoff run, Matt Flynn got the start and played the game of his life.

The former LSU quarterback led the Packers to a thrilling victory over the Detroit Lions 45-41.

Many were expecting the Lions to sneak a win by the Packers to lock up the No. 5 seed in the NFC playoff picture.

Flynn had other plans.

He completed 31 passes for 480 yards and six touchdowns and looked like No. 12 out there.

Flynn led the Packers to the win in a pressure situation. He threw his sixth and game-winning touchdown pass to TE Jermichael Finley with 1:10 left in the fourth quarter.

The Packers are riding momentum going into the bye week to rest and prepare for their first playoff game of year.

This might be Matt Flynn's last chance to get a Super Bowl ring as a backup QB.

He will no doubt be a starter next season. There are a lot of teams who are looking for a franchise quarterback.

He could end up like Kevin Kolb, who had success as a backup for the Eagles and ended up in Arizona. Kolb did not have the season the Cardinals had envisioned. He struggled at times and dealt with a concussion. 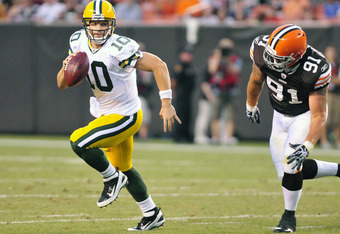 On the other hand, Flynn could have success like Matt Schaub. Schaub showed promise as a backup for Michael Vick in Atlanta and got his chance as a starter in Houston. He's gotten better every season and would have had his best chance to win a Super Bowl this year except his season ended on IR.

Flynn knows what it is like to be backup when he was playing at LSU.

He was the backup to JaMarcus Russell until his fifth season when he led the Tigers to a National Championship.

In the right situation, Flynn will succeed very early as a starter. For his sake, I hope where ever he ends up, he'll be given the chance to develop as a starter.

It would be interesting to see Flynn take on Rodgers.